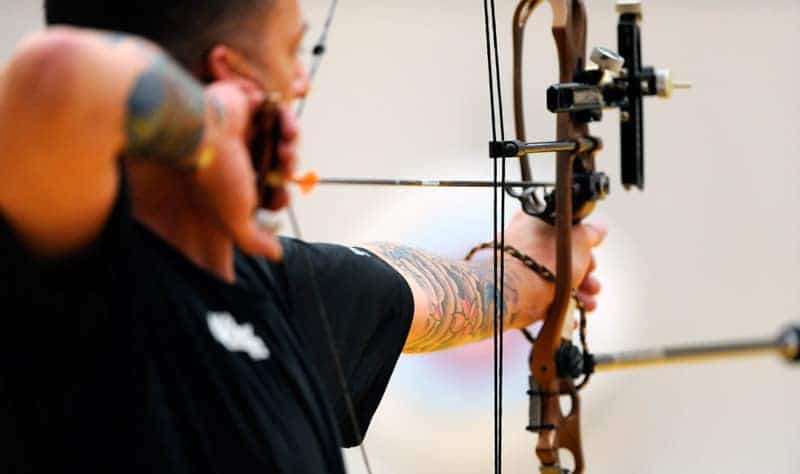 Learning how to measure arrow length is an essential knowledge you should incorporate in your archery life.

Safety must become your priority; and the length of your arrow determines the level of security you’re experiencing when doing the activity.

For starters, it is a severe hazard to set up your bow with arrows that are too short.

Having “just enough” is also insufficient as you need to make your arrow sit at least an inch beyond the arrow rest when you are at full draw.

So if you want to know how to determine arrow length, dig more in this article.

Margin of Safety and the Danger of Ignoring It

A follow up to what has been stated above; you must have the right size of an arrow before you can truly play the sport in optimum safety.

Attaining the margin of safety means giving a tiny bit of extra length of the arrow for it to have an ‘allowance’ like the 1-inch rule for the arrow rest.

This is actually just a simple matter but comes with grave consequences if taken for granted. Having an arrow that’s too short opens the possibility of it lodging behind the arrow rest when you’re at full draw.

You may not notice it initially, but the arrow could buckle then snap once you release – a situation called an obstructed path shot.

The next thing you know is your arm or bow hand is infested with carbon shards from the snapped arrow, which nobody would want to experience. And all of this could happen just by having the wrong arrow length.

Another requisite for knowing how to measure arrow length is being aware that deliberate cutting of arrows is quite dangerous and must not be done without a valid reason.

Some shooters make the mistake of cutting arrows too near to the arrow rest. They do so in the belief the arrow can attain its full speed and at the same time obtain minimum mass. 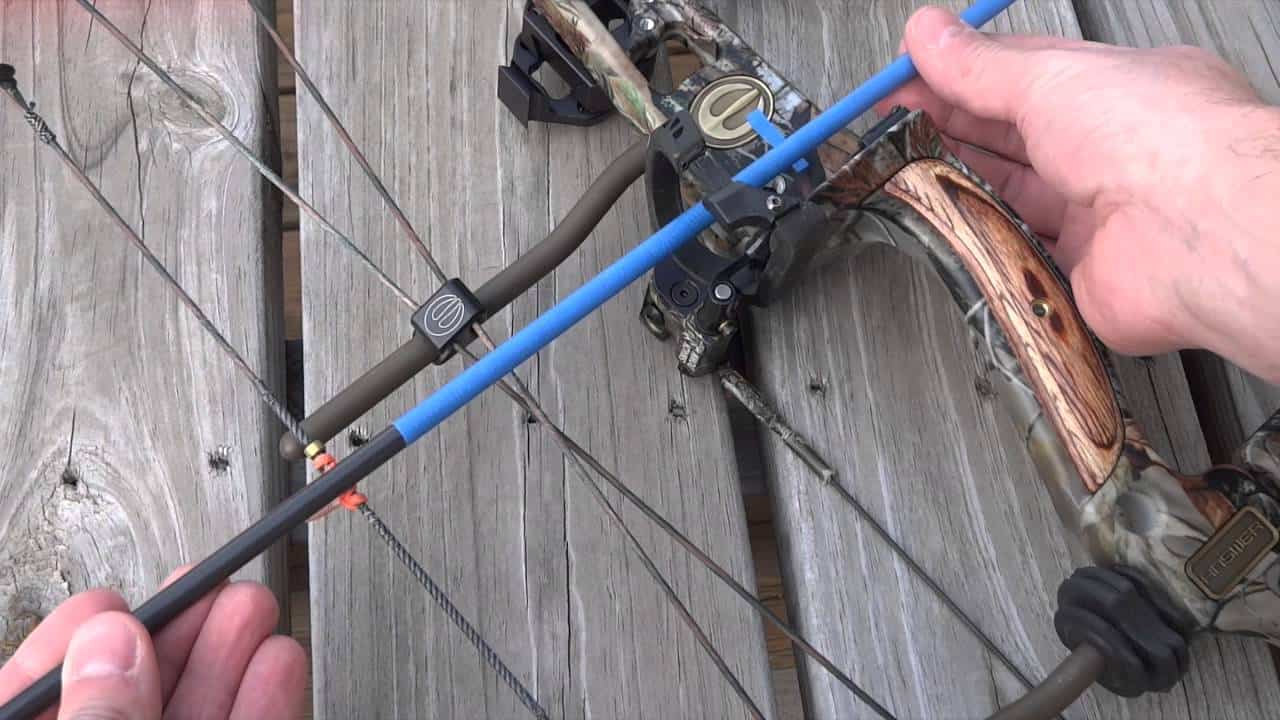 However, gaining 1-2fps speed by cutting arrows is not worth the risk of actually getting your forearm stuck with an arrow shaft. Lesson: just don’t shoot too short arrows.

Making it longer is hazardous too

There’s so much speculation about arrows that are “too short” so some shooters seek refuge to the other side of the extremes: having arrows that are too long. It may be a logical move at first glance but in reality, this is just not smart.

Shooting an excessively long arrow gives the shaft an unnecessary weight which puts efficiency in jeopardy.

Furthermore, additional spine requirements are needed when having extra arrow length. So if you don’t want to limit the performance of your bow or dramatically decrease the speed of your arrow, never have arrows that are “too long” either.

Well, this is a critical section so you must put attention to this. The majority of shooters, probably including you, have this idea that the right length of the arrow is equivalent to the length of the bow’s full draw length.

It is indeed a wise idea but not right enough. Matter of fact, this is a hazardously unfitting rule of thumb.

So it is a bad move to assume arrow length and draw length correspond directly to each other.

How to Determining Arrow Length through Bow Type

There are multiple factors to consider in measuring arrow length, and the primary basis is the kind of bow you’re using. In general, bows are classified into two: depending on their riser style.

The center-shot riser style is a more modern type of bow. The cutaway center-shot riser can be seen in almost all compound bows today. On the other hand, older bows have a different style of riser, basically a non-cutaway type.

If you have an older bow, those that originate in the 80s and early 90s, it is recommended for your arrow length to be “more than” your bow’s AMO draw length.

On the flipside, if you have the latest compound bows or other modern models, it is suggested for your arrow length to be “less than” your bow’s AMO draw length.

Learning how to determine arrow length begins by knowing fundamental rules which have been introduced just above followed by a more in-depth knowledge starting from the clearance for broadheads.

Broadhead pertains to the type of arrow which tip is larger than the diameter of the shaft itself. If you intend to use a broadhead with a traditional molded riser bow, it is recommended for the arrow length to be “at least” of the same length as that of the bow. 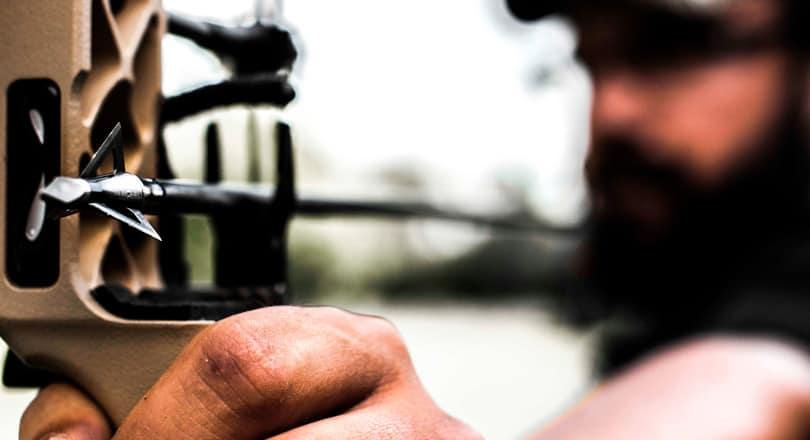 The reason behind is simple. There wouldn’t be enough room for a broadhead arrow to be drawn back entirely because the tip is fundamentally bigger than the body of the arrow.

If you draw that particular arrow, the arrowhead can’t get pass over the arrow shelf. Thus, it is expected for one of the blades to snag on the riser’s edge when you make a full draw. 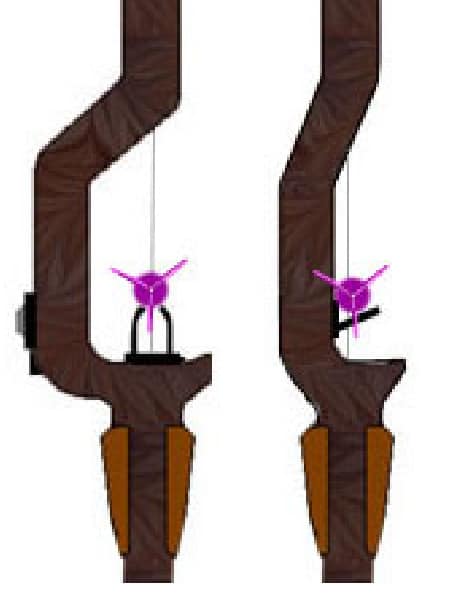 You can shoot a much shorter arrow with modern bows because common broadheads can be drawn/pulled back beyond the riser’s outer edge, thanks to the center-shot cutaway risers featured in the modern bows.

Logically, shooting shorter arrows would be faster since they are lighter than long ones.

Moreover, the modern center-shot cutaway bow’s minimum arrow length requirement is determined by the position of the arrow rest.

The ideal measurement of trimming your arrow is 1” to 1.5” beyond your arrow rest.

It will be easier to choose an arrow length if you have a vintage bow (from the 80s or 90s) because it doesn’t feature the center-shot cutaway riser.

So if you are, indeed, using an older version of a bow, you must use an arrow that is ½” to 1” (inch) longer than your bow’s actual draw length.

Furthermore, you will need a slightly longer arrow than the bow’s draw length if you intend to use your bow and arrow as a means for hunting small game such as Snaros, Judo Points, Turkey Guillotine Heads, Condor Tips, and more.

Depending on the user, a broadhead arrow, and a center-shot cutaway bow won’t get along well as that type of riser can’t offer enough clearance to draw broadheads beyond the riser’s outer edge.

Positioning Measurement of the Arrow Rests

There is a device called an “overdraw;” it is designed to reposition the arrow rest by relocating it rearward. Making the arrow rest position in a rearward way allows you to use shorter arrows.

However, recent innovations introduced lightweight carbon arrow shafts which have become increasingly popular that made overdraws insignificant to the consumers.

But the concept still lives, modern types of arrow rest work exactly like that of an overdraw, allowing the rest position come nearer to the shooter.

Here are the specific positions of the arrow rest and see how they differ from each other:

The most dependable approach is to draw your arrow back and measure it according to what is stated in the bulleted list.

Determining your maximum arrow length would also become much easier when you perfectly set your draw length and mount your arrow rest permanently in position.

Remember, the long can always be shortened but not the other way around. You can make an estimate (if you still don’t have a bow to measure) based on the type of arrow rest installed and the bow’s draw length.

There’s no turning back once you cut a stock length arrow. Keep in mind the reminder above.

Trimming Arrows to Your Desired Measurement

Raw shafts are usually 32” to 34” in stock lengths. They are designed that way so that users can trip them to their desired arrow length that suits their bow.

There are also many who offer to trim the stock arrows to a particular length (free of charge), but you can also choose to receive your arrow in full-length and uncut.

Knowing how to measure arrow length is not much of a complicated concept. You just have to keep in mind the things stated in the article and you’re ready to go. Happy shooting!