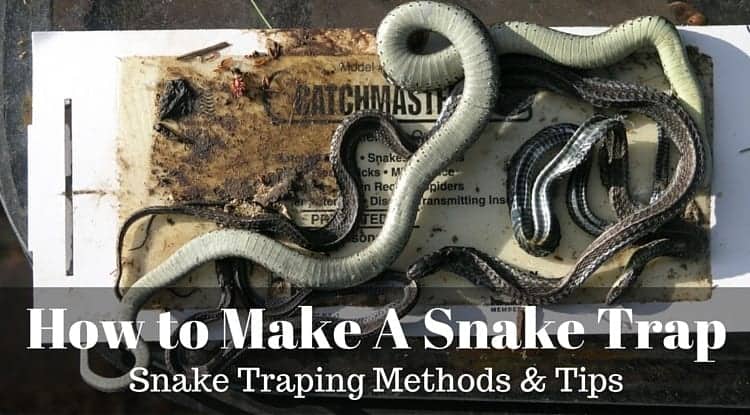 You’ll never know when a snake will show up; it could surprise you hanging around in your basement or garden. Worse scenarios include a snake swallowing your beloved poultry animals in your chicken coop.

However, it would be inhumane if you kill snakes right away especially if it doesn’t pose a threat. After all, it’s just like any other animals – not capable of rational thinking (though they are smarter than others).

With a better sense of thinking, you hold the responsibility of achieving a win-win situation for you and the snake in case one shows up. The most humane way of handling a snake situation is trapping and releasing it somewhere.

In this article, I’ll show you how to make a snake trap?, as well as provide all relevant information related to it.

In case you’ve spotted a snake(s) nearby and lost it, it is recommended to make a trap immediately. But before that, you must first identify the snake if you can.  It’s important to recognize the species you intend to trap so you know what you’re dealing.

Knowing what type the snake you saw allows you to assess the right trap, as well as decide how cautiously you need to handle the snake once it has been captured.

Note: If you have pets or kids that you think is in grave danger due to possibly getting bitten, get your members out of your house immediately and call animal control right away and have them catch the snake for you. 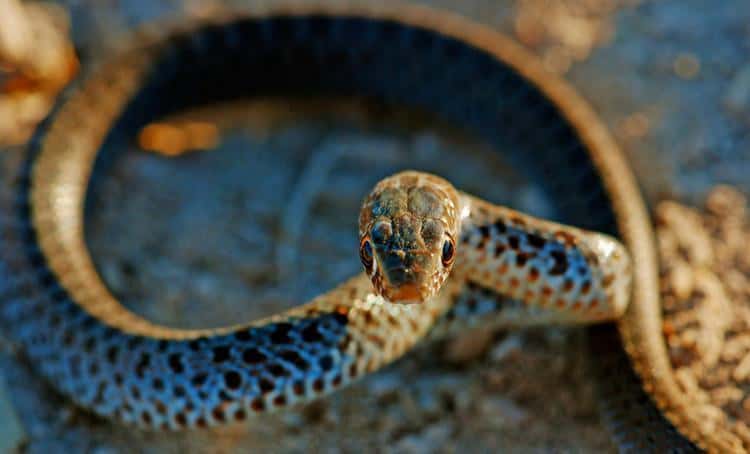 Have a copper look and black stripes.Warning signs that the snake is venomous 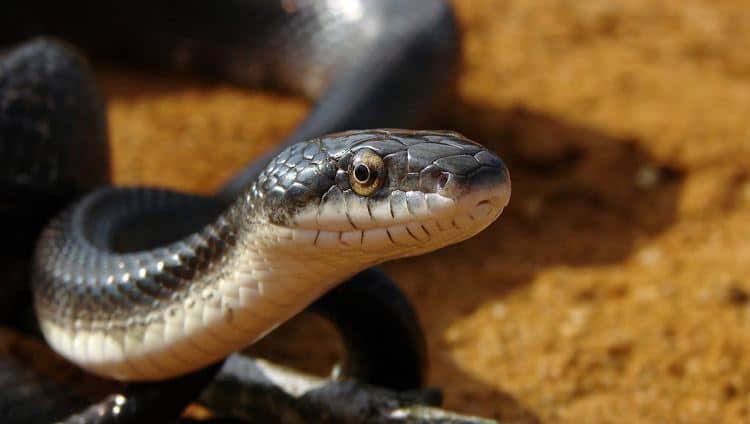 You can tell if the snake is non-venomous when:Don’t be alarmed, though; the snakes which you encounter in your basement or backyard are mostly harmless.

It may be frightening to find a 5-foot snake in your basement, but they usually pose no harm to your pets or fellow humans. Most of them just wander, got lost, and unfortunately came by your home.

Note: Non-venomous snakes may not have lethal bites, but they are still dangerous as they can wrap around a prey’s body and squeeze it to death.

Ways On How To Make A Snake Trap 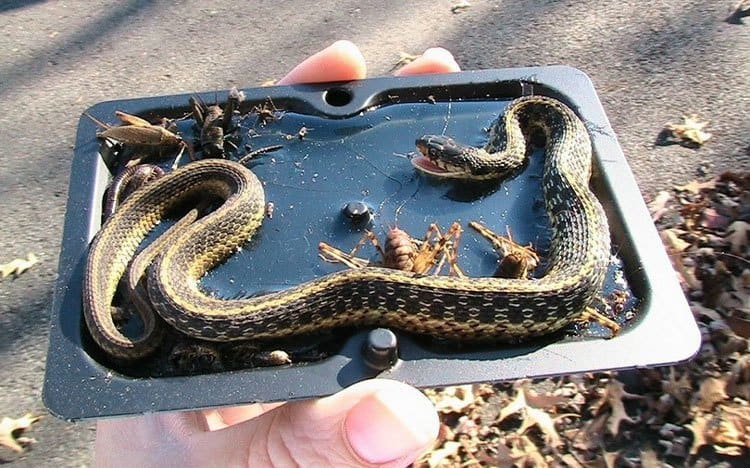 Glue snake traps are not rare in home and garden supply stores. Ensure that you’ll buy something that’s large enough to contain the snake. There are also a lot of brands to choose from, but basically, they all work the same.

However, some have added features like being reusable. Despite that impressive feature, it’s still good to buy a single-use trap to ensure efficiency.

These traps come in both large and small sizes; these are typically boxes that you will put in a spot near the snake itself. If you can’t find the snake, put the glue trap in the place where you last see it. At least you’re able to set the trap where the snake is still possibly nearby.

Glue traps are usually made with the bait already installed inside, so you don’t need to worry about that. When the snake is attracted to get the bait, it will crawl inside the trap and will get stuck due to the glue on the trap’s floor, hence trapped.

What to do next

Observe whether the snake is already glued or not. Once glued, you can now transfer the snake somewhere else. You can either call the animal control hotline or drive your way to a remote place suitable to release the snake to safety.

How to release the snake

Open the trap and simply pour oil over the snake until it gets loose and let it glide away from the trap. You should also be cautious enough not to touch or harm or the snake so it can’t do the same thing to you.

Depending on what you bought, there are glue traps that don’t need to be opened when letting go of the snake; they are specially designed for a safe snake disposal. You might want to check this feature out.

Grab the following:If you have a small pet snake that’s become elusive enough to escape without you noticing it, then this trap is recommended for you. It is a basic homemade trap made of a plastic bottle.

Be careful though, there’s no hundred percent assurance you’ll catch the snake you’re looking for because there’s also a chance you’ll capture a different one. 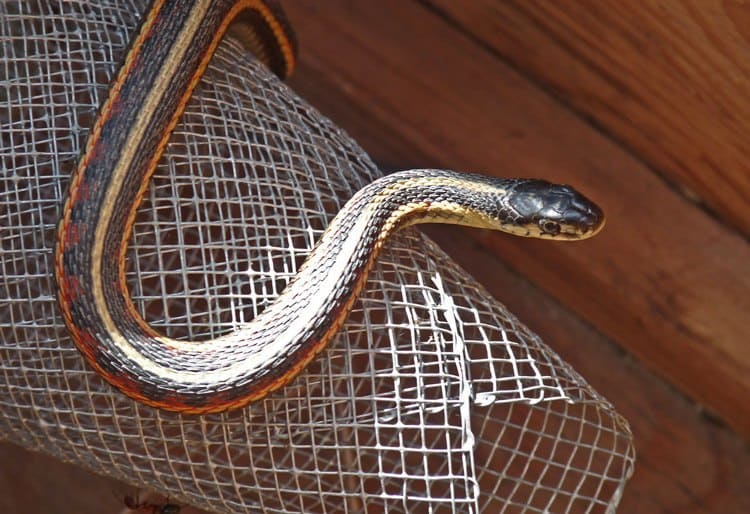 How to Set Up

All snakes share the same characteristic when it comes to eating – they do NOT chew. Instead, they swallow. Once your ‘presumptive hungry’ snake got in the hole with a diameter enough for it to pass through and ate the mice, it won’t be able to come out.

Since it swallowed the whole mice, you can expect its body to be rounder and bigger. Thus, it will get stuck and can’t get out of the bottle.

Also, it is assumed that the snake will sit tight for the meantime to start its digestion process. When that time comes, you can get the bottle and place it in its proper place where it should be.

Grab the following:Minnow Trap is also known for the term “funnel door wire cage snake trap”; the concept of this trap is similar to the simple bottle trap only that you can catch larger snakes with it.

This trap is also suitable to be placed in the sun in a place where you feel like the snake is hanging around. 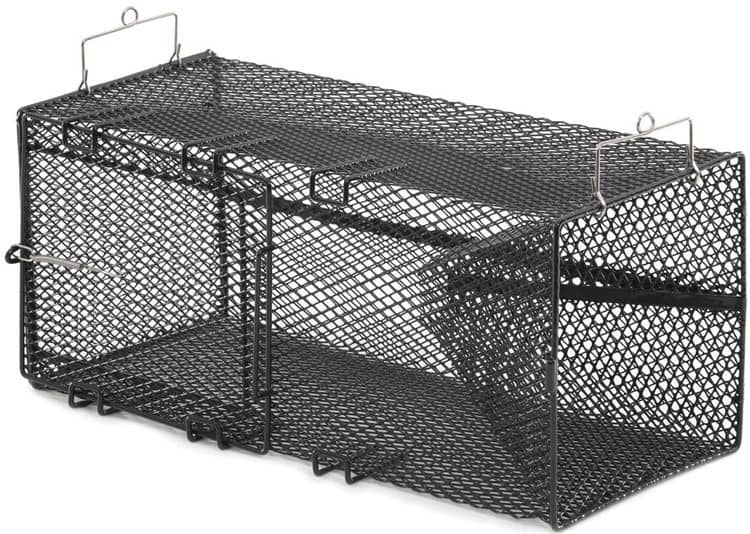 How to set up:

Just like the bottle trap, the snake will be lured inside because of the baits (eggs). When it swallows the whole eggs, it won’t be slim enough to get out. Now is your chance to relocate the snake.

The problem now is releasing the snake. The wires holding the identical cylinder must not be permanently sealed; locked enough to prevent the snake from escaping but not too sealed for you to open it quickly.

If you’re not comfortable with making one, there are minnow traps available in local stores. They are ready for use and can be utilized again for multiple times.

You should check your trap regularly because the snake might be able to come out if it has already digested the food inside it. 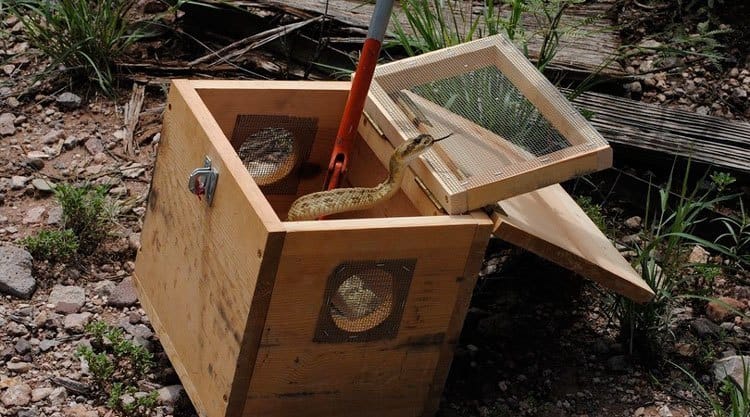 This trap is a little complicated to make so I suggest looking for it in a local specialized shop. This trap can be used if you’ve spotted a wild snake in your house which means you need a larger ‘weapon’ against it. The wooden box can be placed near the den of your identified snake.

The main idea is to put the trap just at the entrance of the snake hole. When the animal tries to leave its hole, it can be lured directly at the box.

Once the snake enters, it triggers the box to close its cover, hence trapped. Now you can carry the box and release the snake someplace else.

When not confident enough to make a homemade snake trap, you can always purchase in a local store. Since now you know how to make a snake trap, it’s time to wait until the snake gets captured. Continue reading to know what to after you caught the snake.

What To Do After You Trapped The Snake?

The primary rule you need to keep in mind after being able to capture the snake is ‘never dare touch to touch it.’

This rule is highly important especially if you have no idea what type of snake you have captured. Unless you know what you’re dealing with, then you can do appropriate actions to it. Otherwise, it would be wise to let it sit in your trap for the meantime.

A wild snake, in particular, does NOT like being touched. When you try to touch it, expect it to become violent, and it will try to bite you.

Aside from touching it, you should also avoid poking or shaking it. Also, do not allow your kids or pets to come near the snake. Snakes can only infuriate because it treats you as a threat. Remember, trapping a possibly deadly animal is not child’s play.

Carefully lift the trap and put it in your car compartment. It’s not advisable to drive with the snake trap right beside you in the passenger seat. Be safer than necessary when handling these unfriendly creatures.

It is also important to pick a place where there are no neighborhoods nearby; you wouldn’t want the snake to disturb another home. Putting in a populated area may harm the people in it. So make sure you release it in a remote area.

What if I get bitten? Snakebite first aid. 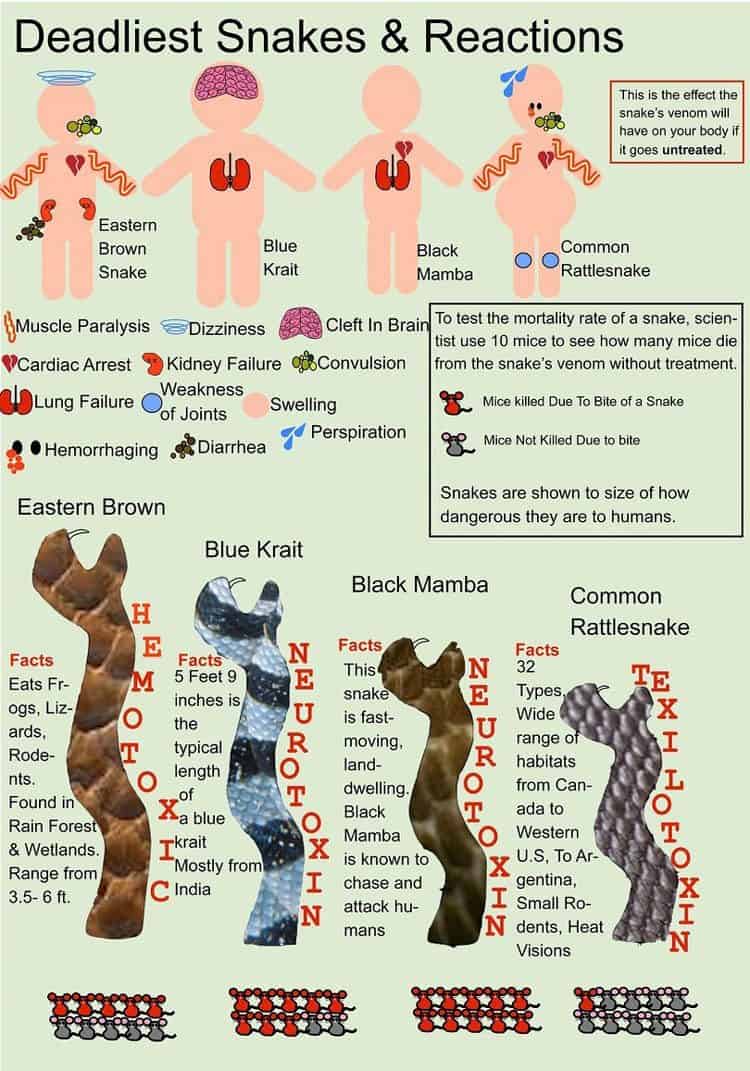 Bites can be life-threatening. Snakes produce venom that could stop your heart; something you apparently don’t want to experience. Here are the steps to do when you got bitten.

Don’ts When You Get Bitten

These are the attempts that you should NOT do in case a snake bites you, regardless if you know it’s venomous or not. Being safe than sorry is better.

This part is a little uncertain because you never know how the snake will act when you open its trap. Be prepared because some snakes will turn against you; their nature perhaps?

However, there are also some snakes that are happy enough to be released and will just slither and get lost in the grass.

Wear long pants (multiple layers if you can) and thick gloves in case the snake will initiate a quick turn and strike.

The trap only serves as a temporary isolation for you to transport it where it should belong. Depending on the type of trap you used, there are different ways of freeing your captured snake.

Be careful enough when you open the trap because some snakes can jump to its prey. It may look funny, but the safest thing to do is to run as fast as you can after lifting the lids. Get back to your car and drive home safely. However, this means leaving your trap behind.

If you value your trap and want to use it again for future use, you are always free to wait until the snake comes out and goes out of view.

By then, you can get the trap and head back home. Always be careful, though; the snake may come out, but you can never be so sure whether it just hides and waits to revenge or not.

There you have it. You now have relevant information on how to make a snake trap. Not only that; you also get to know all essential facts and crucial information related to this topic. The next time you spot a snake in your premises, you already know what to do!