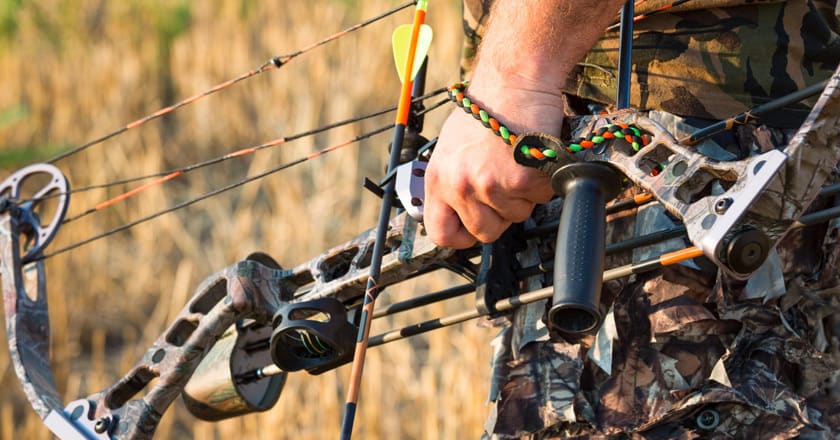 How compound bows work? – This is something that both beginners and seasoned archers need to understand thoroughly before holding a bow and releasing an arrow.

Compound bows are a modern weapon known for their high velocity, power, and accuracy.

The compound bow is the most up-to-date iteration of the bow and arrow.

When was the last time you shot an arrow? For some people, it was just a couple of days ago. For others, it wasn’t since they were Boy Scouts.

Without further ado, I’m going to give you a brief overview of how compound bows work, and things you need to know to shoot an arrow with a compound bow.

Design of a Compound Bow

The compound bow is a simple, manufactured machine. It updates the bow and arrow in that it is made from lightweight, durable material, and has joints that allow the user to draw the arrow back further and achieve higher velocity shots.

I’m going to go through some of the basic parts to help you have a better picture of a compound bow.

The riser is the most rigid, and durable part of a compound bow since this part connects the limbs, rest, bow sight, and stabilizer. The lighter it is, the better you can target and shoot.

Back in the days, the riser was made of heavy materials, which made it hard for archers to hold the bow and arrow steady while aiming down the sight.

Thanks to modern technology, the riser nowadays is much lighter. It is usually made of aluminium, carbon fibre, or aluminium alloy.

These are the ‘arms’ of the bow – they were traditionally made from wood. They are drawn back when the bowstring is pulled and store energy that is released with the shot.

You can find the cams at the tip of the limbs. A compound bow can have a single cam, two cams or hybrid cams.

Today, most compound bows have specially designed cams for better performance. The asymmetrical shape of the cam is one of the crucial factors that a manufacturer pays close attention to.

Particular cams are made for different intentions, maybe to generate speed, or solely just for comfort.

You pull the bowstring to rotate the cams and flex the limbs. As you release it, you’re shooting the arrow.

The cables connect the limbs of the bow, through the cams, enabling the archer to draw the limbs back, storing energy for release when the shot is ready.

Above are some of the basic parts of a compound bow I think you should know before we jump into finding out how compound bows work.

Many people love compound archery because it is not hard to learn. However, master shooting a compound bow is another story.

Compound bows work by incorporating the functions of the cams, cables, and pulley system. The aim is to increase the amount of energy stored in the bow while decreasing the amount of weight felt by the archer when drawing an arrow back.

Traditional bows, on the other hand, are very easy to understand. When you pull back the bowstring, the limbs flex and stores energy which will be released when you shoot the arrow.

Let’s take a look at how compound bows work as the designs of the two bows are very different.

With traditional bows, you had to draw the string back with a simple pulley system to shoot an arrow.

Today, most compound bows eliminated this feature, and they left off around 80% of the labelled draw weight. This is called the ‘let-off.’

As I mentioned above, the cams of compound bows are designed for different reasons, but in general, they make it easier for you to draw back and shoot an arrow. 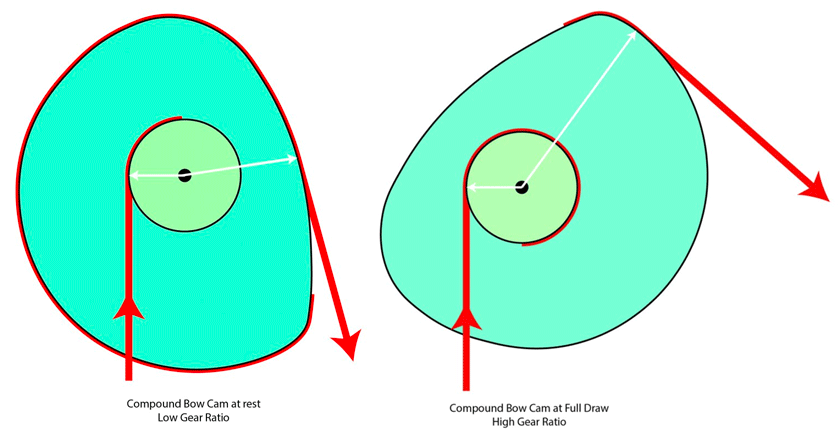 I assume you all know that energy is equal to force ‘times’ distance. Traditional bows like recurve or longbow have a linear draw weight curve, which means the bow would get harder and harder to draw as it is pulled back.

In contrast to this, cams of compound bows usually accomplish let-off by being oblong, and it requires less force to hold the draw weight as they rotate back.

Compound bows are not just easier to aim than other kinds of traditional bows; they also significantly improve the speed and accuracy of the arrow after you release it.

This feature benefits those who like hunting as an arrow which was shot by a compound bow can reach up to 300 ft/s.

There are skittish animals like deers or squirts that can dodge arrows. Therefore, faster arrows would increase the chance of successfully hitting the target you want.

However, moving into the field or downhill is a whole different story. As soon as you start bringing angle calculations into real life, the world becomes shockingly uneven.

The ability to deal with this harsh reality is one of the advantages a compound bow can provide you.

Knowing how compound bows work is actually good if you are into archery and want to get better at this sport.

A compound bow is a complex set up that requires lots of research and reading to understand truly. Thank you for reading.