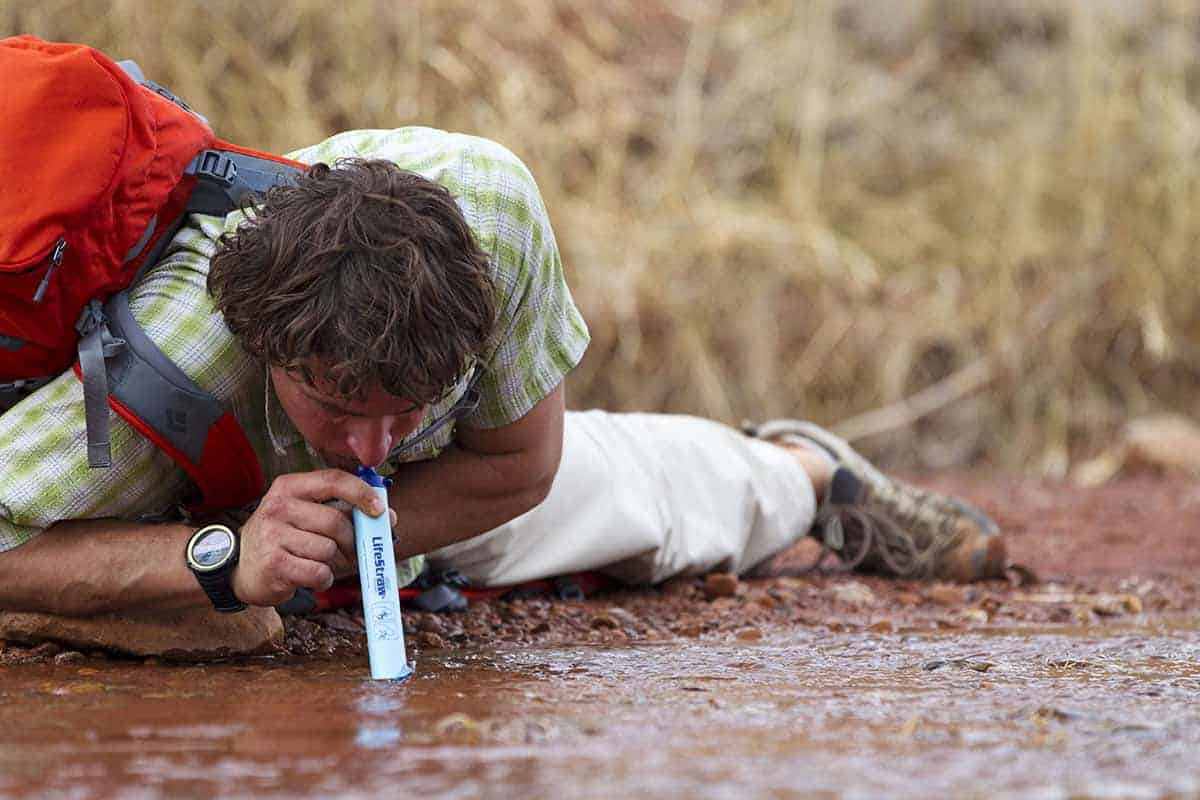 There’s a limit on how much potable water one can bring in times of emergency situations or camp activities.

Bringing a big jug of water everywhere you go is tremendously tiring, and it would run out in no time. However, your immediate surrounding has water sources only that it’s unsafe to drink.

Technology continued to move forward, bringing us innovations that are portable and lightweight. This article presents the best survival water filter you can bring with you the next time you go outdoors.

Aside from water filters, other tools and methods are used to transform the water obtained from a lake or river with unknown organisms into making it safe to drink.

Along a wide selection of water purifiers to traditional boiling, perhaps water filters are one of the most preferred tools by campers as they are quite lightweight and will last for at most a thousand liters.

What are Water Filters?

Water filters are necessary as they filter out harmful contaminants like bacteria and viruses, making them safer to drink.

What happens when you risk drinking the water from either the lake or the stream? It can do more harm than just typically quenching your thirst. 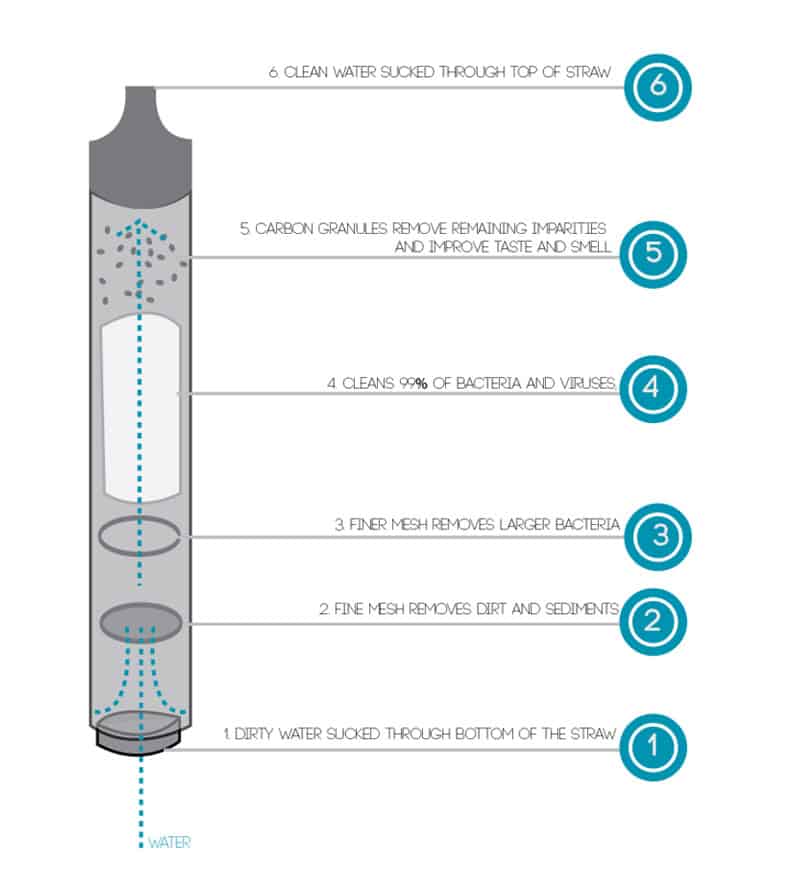 For instance, you will get an upset stomach, and you will suffer from diarrhea and vomiting. Diarrhea is known to be dehydrating and as such you will need to drink water.

However, if the only source of water is from the lake or river, there are minimal chances of getting better unless you evacuate the area to get hospitalized.

Water filters help remove bacteria as they have internal filter systems where the untreated water passes through. It should be known that they only filter out bacteria, protozoa, and rarely viruses, but there’s no way of filtering out the chemicals as they are in liquid form.

That’s why if you try to drink from a water source with a foul odor may be caused by chemicals mixed in, the smell and the taste would probably stay the same.

Among the water filters in the market, we’ve compiled three products that are well-trusted and bestsellers because of their respective advantages.

Feel free to read them below and decide what brand you should buy. 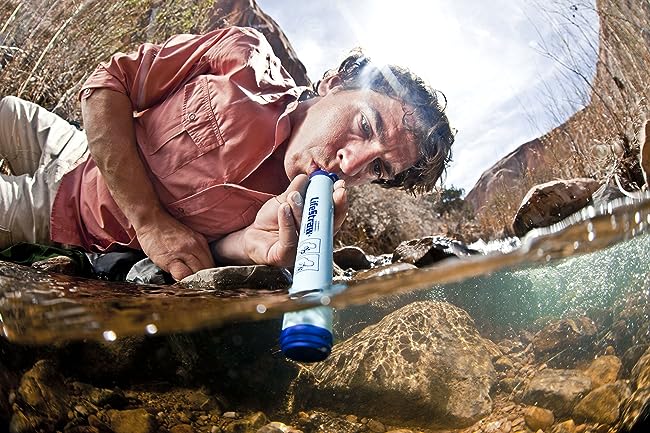 Recognized by many award-giving organizations around the globe, LifeStraw is at the pinnacle when it comes to potable water in rural areas.

Millions of people are using it, particularly in Africa where there’s no immediate water treatment source in most rural areas.

Many people suffer from water-related illnesses like typhoid from which their day to day life is primarily implicated.

So as advocacy, their company has promised then and still continue to deliver safe drinking water to developing countries in Africa for each LifeStraw Personal Water Filter sold.

NGOs have also donated hundreds to thousands of these water filters in natural disaster-stricken countries like the Philippines after Typhoon Haiyan and Haiti after the earthquake.

What makes LifeStraw the best straw for you?

We’ve compiled the best reasons we could find and see the wonders that it can do! Since 2005, LifeStraw is proved to remove 99.9999% of pathogens present in the water as it can filter from 0.2 microns and up.

Protozoa like Giardia lamblia, Cryptosporidium Parvum, Entamoeba histolytica; and so with bacteria like E.coli, Campylobacter, Vibrio cholerae, Pseudomonas aeruginosa, Salmonella, and others are substantially removed.

As such, the turbidity of the water is mostly reduced, making it more natural and safe for drinking. 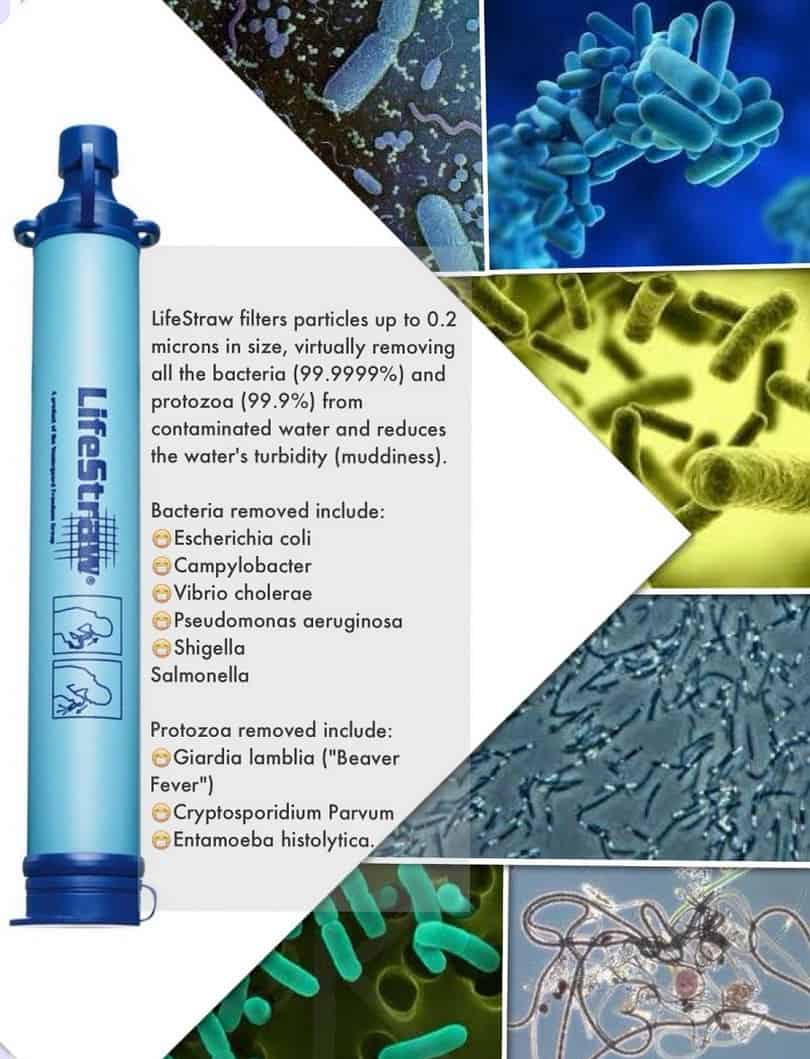 This water filter’s dimensions are being 9 inches in length, one inch in diameter that can fit right in a pocket of your bag! Being lightweight at 2 oz, you can carry it wherever you go.

In fact, the longevity and durability of this straw are impressive. You can filter up to 1000 liters of water as it is made of a very sturdy plastic.

To use LifeStraw, fill up your jug with the water taken from the unreliable water source. Place it and sip water until you feel quenched. Better yet, try sipping water from the reservoir itself.

There’s no aftertaste as no chemicals like iodine and chlorine are used. It promises a very high flow rate, so you can keep sipping until you can’t take it anymore.

Cleaning is as easy as it could ever be since you don’t have to remove any parts. After every drinking session, flush out the particulates and dirty water by blowing through the water filter while being submerged. After which, let it dry by letting the mouthpiece uncapped.

LifeStraw Personal Water Filter is designed to be used in the backcountry where there aren’t a lot of varieties of contaminants except bacteria, protozoa, and some viruses.

For a water source close to urban areas, expect it to be contaminated with chemicals and viruses somehow. You will need a more advanced water purifier for that. 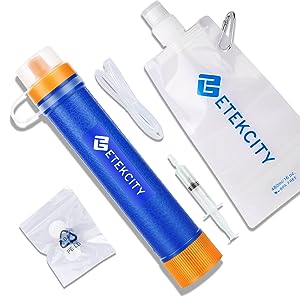 Next on our list is the water filter made by Etekcity.

One of the bestsellers for water filters as it boasts removing 99.9999% of contaminants including bacteria, protozoa, viruses, heavy metal ions, chlorine, volatile organic compounds, etc.

Like the previous brand, it can almost completely wipe out the trace of viruses from your drinking water as it can filter starting from 0.01 microns. And it is used the way you use a drinking straw.

As obviously stated from its name, this product can filter up to 1500 liters of water or roughly 400 gallons.

It also has a unique feature of double filtration system wherein the untreated water passes through hollow tube UF membrane and then through an antibacterial carbon filter. 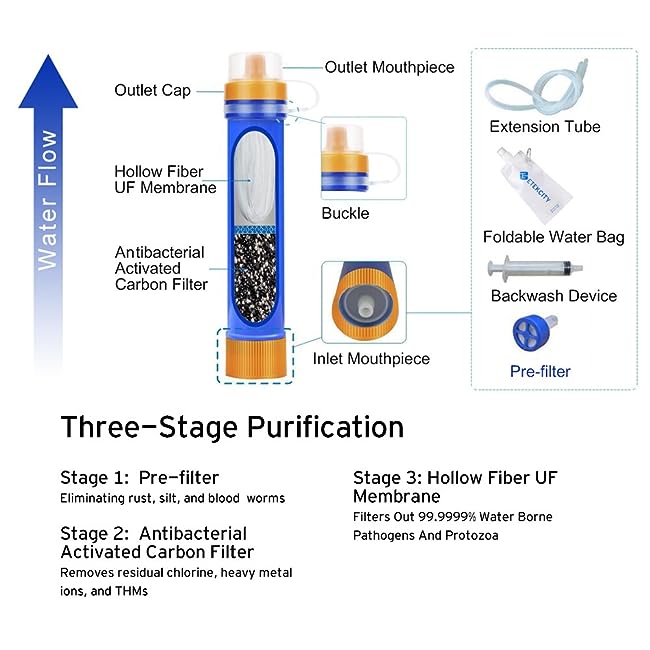 Precisely what you need to be fully prepared in filtering. It’s perfectly small and portable along with the accessories, so you don’t need an ample storage to fit them in. 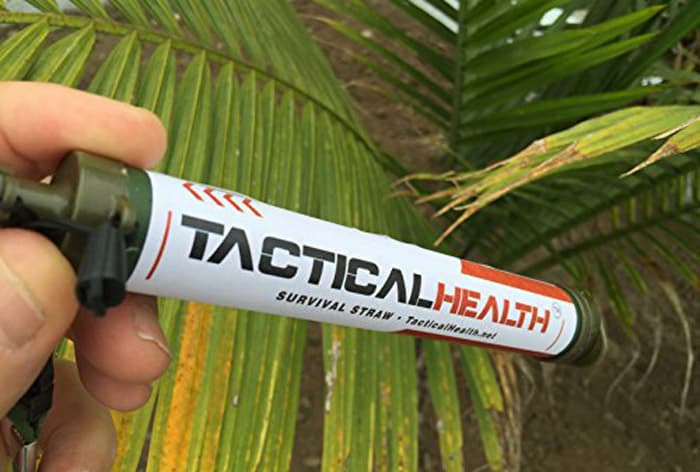 It is not as immensely popular as the brand introduced earlier, but this one surely trails after! Being a bestseller, of course, campers and hikers alike know the qualities the Tactical Health Straw Water Filter has.

And so, you should learn it too. Removing bacteria, protozoa, and even viruses are possible with this 10-inch straw filter.

With its microfiltration beginning from as small as 0.01 microns, it has easily transcended the problem of some models starting at 0.2 microns when it comes to eradicating harmful viruses from their drink.

Not only that, but it can also purify water with its high poly-iodine to kill the smallest of the harmful contaminants.

The structure of this water filter, aside from the 0.01-micron membrane and poly-iodine, include activated carbon and some extra filters.

This intricate construction is what will make you feel safer as you directly sip from the water source.

Before forgetting, it also has an exceptional water capacity exceeding the 1000 liters from the previous brand.

It has a whopping limit of 2000 liters or 530 gallons of water! The longevity and durability are no longer a question with Tactical Health Straw Water Filter.

Like the previous model, the mode of operation is similar. It’s just like using an ordinary drinking straw.

Even the cleaning is similar, just backflushing the water to separate the stuck particulates away. Though the price is quite higher, it won’t hurt if you’re sticking with a fixed budget.

What are the Contaminants Commonly Found in Untreated Water?

As stated earlier, it’s the contaminants that make water from a natural source risky to drink. Contaminants are either organisms or chemicals/particulates.

As for the organisms, they are either waterborne pathogens or external contaminants from animal wastes that carry harmful parasites or viruses.

Either way, they are pretty much disease-causing organisms that can’t be seen through the naked eye.

They are measured by the unit of microns; in which one micron is equal to one-millionth of a meter. Each species vary in size, and water filters endeavor to cater all sizes to make your water drinkable.

As water filters, they have tiny sieves as the internal filter system and most can remove 99% of these pathogens.

The commonly found microorganisms in water include:

Note: Water filters are unable to filter out viruses effectively as most models start at 0.2 microns. Water purifiers are instead used to remove viruses completely.

As for the nonliving contaminants like chemicals and particulate matter, they are caught up in the water for various reasons.

Water filters are unable to remove chemicals in liquid form, but there shouldn’t be a problem with particulate debris as they aren’t as tiny as microorganisms.

So to get minimal chances of having large debris on your water, obtain water from higher elevations.

Man can survive several days without food, but only three days without water. This means that we cannot survive being thirsty for a long time.

Your primary organs will deteriorate in functioning, and you don’t want that to happen.

There are a lot of water filters that can be bought in the market, but what factors should you consider before purchasing one?

A water filter that you should buy should promise a very high flow rate. The mechanism of getting water is through pumping, but some models are operated through sipping from the cap.

If through pumping the output rate can reach 1-2 liters per minute. But with straw filters, expect it to be slower as the surface area is reduced to make ‘sip and then drink’ mechanism plausible.

Water filters are made to be portable to be stuffed in your backpack or pocket. They are also small in size, some even weighing as little as 2 oz. The length of a water filter ranges from 6 to 13 inches.

There’s no problem with water filters as they can strain microorganisms from as small as 0.1 or 0.2 microns. Some models have similar features that can remove 99.9999% of waterborne or external microorganisms save for very tiny viruses.

With water filters, water is either pumped or sipped. For filters with a pump mechanism, you may have to exert labor effort to obtain water. For straw filters, you only need an enough amount of water that you can suck at a time.

Water filters can be stored indefinitely if properly taken care of. In the field, they are easy to clean. You just need to disassemble the filtering media from the main body and wipe it clean.

For some models, you may need replacement filters to change when the old one becomes clogged. But there are also some models that only need to be blown so particulate matters will unstick.

Depending on the type, you can drink water in a neutral state or a small trace of the chemicals. There are models with additives such as carbon to make the water taste natural.

Water filters, especially personal straw filters cost around 20 to 30 US Dollars. The price is budget-friendly, so you should definitely buy it for camping and emergency purposes!

Owning the best survival water filter that you can find is necessary for survival and anything else. You don’t just need potable water for drinking but also for cooking and sanitation purposes.

Water is vital to a man’s life, and we should all properly preserve its state when we can still easily treat them while we still can for the future generations.