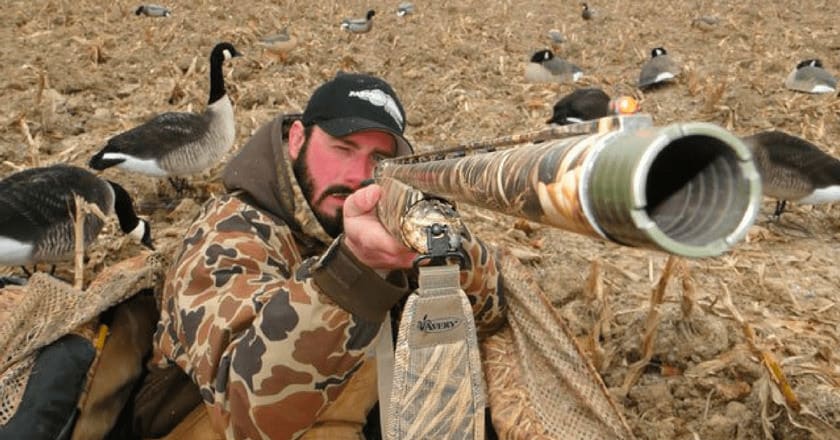 Every hunter has their questions concerning shotguns. One of the most frequently asked would be which shotgun choke is the most open?

As defined under firearms category, the choke is a tapered constriction in the bore at the muzzle end of a shotgun’s barrel.

Its general purpose is to improve a hunter’s performance, making it popular and common today in the world of hunting and target shotguns.

How Chokes do their Magic

The invention of chokes is probably the most significant advancement in shotgun performance. You can consider yourself lucky to have lived in the age where chokes already exist.

To have a grasp of how vital chokes are – just imagine that you may need up to five shotguns to possibly shoot a target should chokes have not been invented in the first place.

Thanks to its inventor/s, hunters nowadays have better chances in their hunting activities.

Typically, there are two types of chokes, while some claim to be three but fundamentally, there are only two – permanent or fixed chokes already integrated to the barrel of the shotgun, and screw-in chokes which are utilized for particular applications.

The choke can enhance your performance through shaping the shot spread to achieve more accuracy and better range. 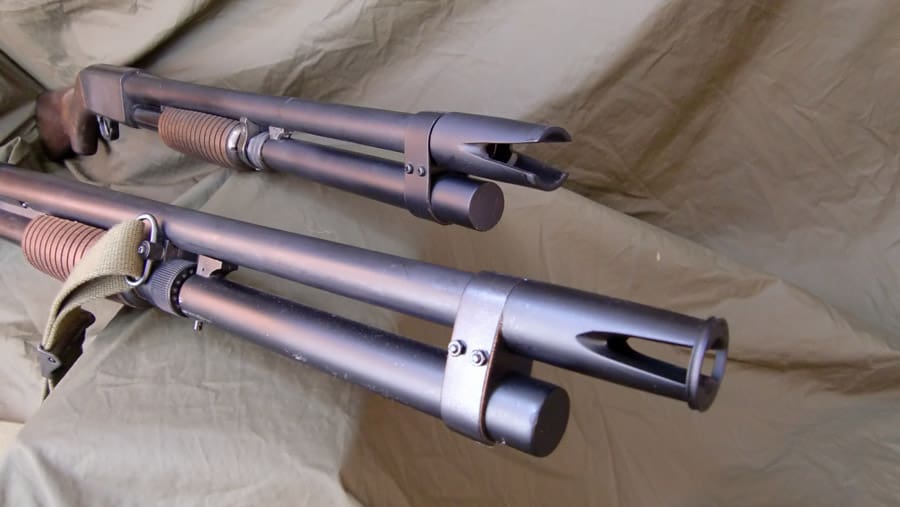 Mastering shot techniques is a must for every aspiring marksman. A successful hunt using shotguns starts with an adequate preparation that may include adjusting, or if necessary, modifying your ammunition as well as your gun for you to attain optimum performance.

The choke, for instance, gives you the freedom of tuning your shotgun to make it compatible with the particular game you desire to hunt.

A single choke adjustment may be enough for a certain game, but it won’t suffice for another.

The choke ultimately affects your pellet density at different distances. Whether screw-in or built-in, the choke can control the shot string as a constriction.

The shot pattern spreads faster when you have a looser constriction. On the other hand, the cluster of pellets stays together for a longer time and distance when the constriction is tighter. 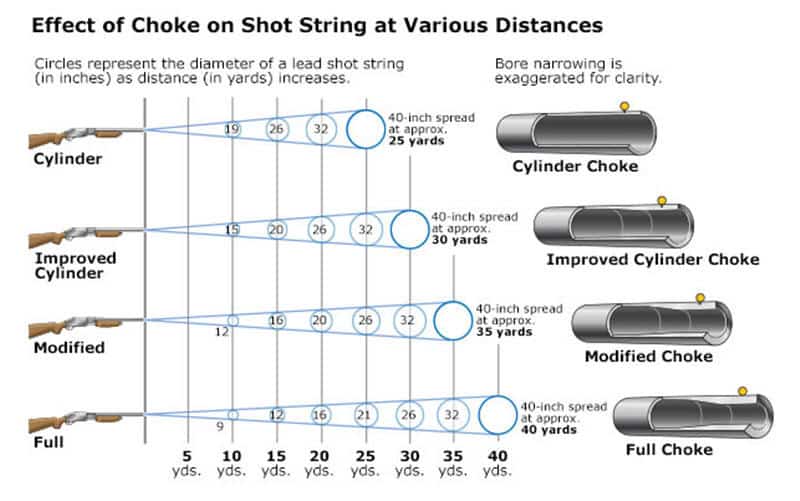 Here are the kinds of chokes listed from the most open to the tightest:

The answer to which shotgun choke is the most open would be the cylinder itself which, technically, could be considered as “unchoked”.

It is paramount you pattern your shotgun for the particular quarry you want to hunt. The ammunition you use also plays a role in the success of your shot attempts. 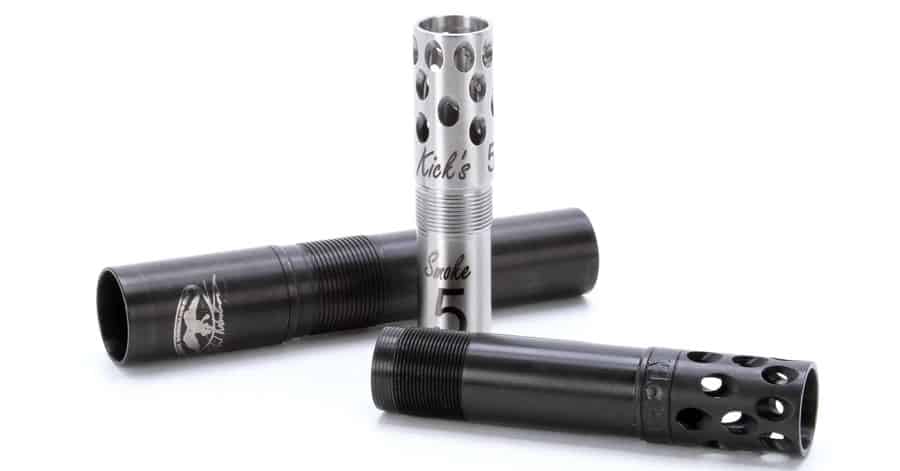 Patterning your shotgun is indeed one of the most important preparations you can do. It simply is a huge factor that determines your level of success in hunting. Every marksman must be able to adjust their choke with the game they want to hunt.

Here is a list of quarries and their corresponding commonly used choke; based on the standard distance from the quarry. You might want to read Patterning A Shotgun for you to know what the standard range is, along with other relevant information that is useful to every hunter.

The list below could only serve as a guide to your hunting sessions and may not assure you a hundred percent success as there are other factors to consider such as hunting conditions, target distance (the chart below adheres only to the standard distance), and the pellet size.

However, the table ensures an increased rate of success if you’re able to follow it.

As you can notice, all types quarry may require either of two given choke kind. The reason behind is there are more factors involved other than the choke alone.

Take for example you want to hunt small birds which are close in the distance but, are fast moving. What choke do you think would increase your chances of successfully shooting a number of them down?

You need to adjust to a choke that creates a wide shot pattern and at the same time, spreads quickly even at close distances.

The kind of choke that fits best the description would be either the modified choke or the improved cylinder.

However, when you want to hunt another type of animal with different characteristics and distance, using the same kind of choke in the previous example would be inefficient and may result in failed attempts.

For example, you may need another choke if you desire to hunt a turkey, which is, of course, a larger bird and lacks on agility & speed and is usually hunted from afar.

The ideal choke for this type of target would be a full choke – capable of concentrating shots in smaller areas. 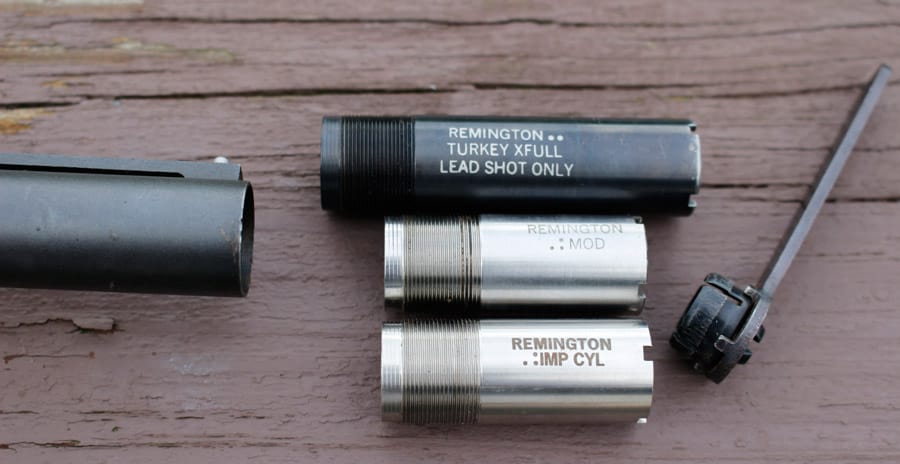 As mentioned above, choke alone is not the only factor revolving the chances of a successful hunting. There are other factors involved, and one of them is the pellet size.

As you may already have the idea, the pellet size you use must also be changed depending on the size of the game that you want to hunt.

After reading the article, selecting the proper choke won’t be hard anymore. You don’t need to take trial shots, adjusting from one choke to another, to arrive at the right one. You only need to check on the chart above the next time you go out hunting again.

The next thing to learn is patterning your shotgun. You may want to check Patterning a Shotgun as a follow-up to what has been stated in this article. The topics are directly connected to each other, so it is vital you have knowledge on these.