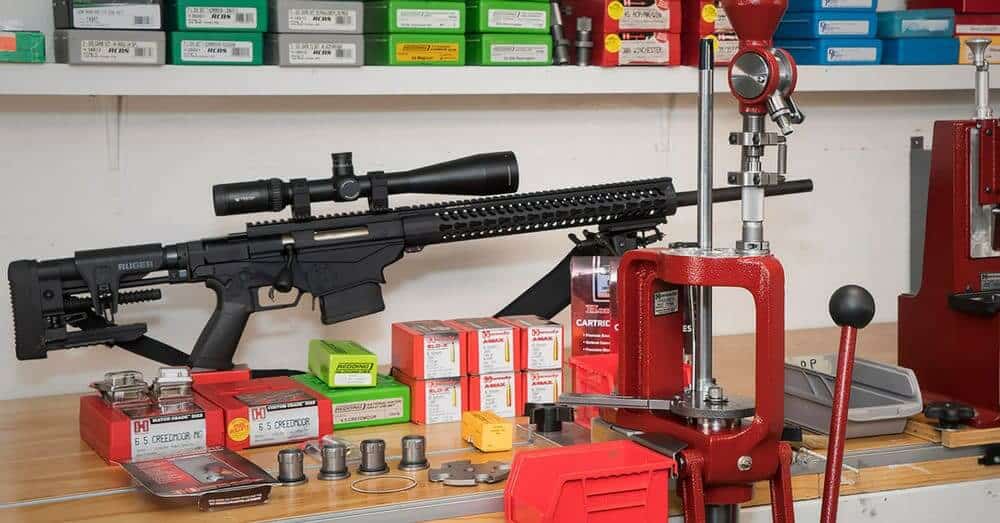 Are you finding the best progressive reloading press to start making your limitless stash?

Perhaps you are an avid shooter and practices gun firing almost every day. That kind of hobby requires lots of ammo and a significant amount of money in the long run.

But with today’s technology, you can now make your very own ammunition right inside your home!

This process is called reloading. Professional hunters and shooters make it their little hobby on the side, and you can save money in the long run, too.

A progressive reloading press is an equipment used to assemble a gun cartridge from scratch for beginners like you.

The materials you will need are a bullet, casing, primer, and of course, the gun powder.

Through a lever that compacts all of the materials into what we know as simply the ammunition.

Some may think that this machine is quite complicated to operate, but once you get the process, you can produce at least 400 bullets per hour.

There is little hand operation as it is well equipped with accessories that do most of the process by itself.

Furthermore, a progressive reloading press has other functions such as powder measuring and deburring.

There are several models available in the market for this specific type.

Progressive presses differ mainly in their prices and the number of rounds produced per unit time.

Through this progressive reloading press review, we identify which of the following are good investments for reloading. 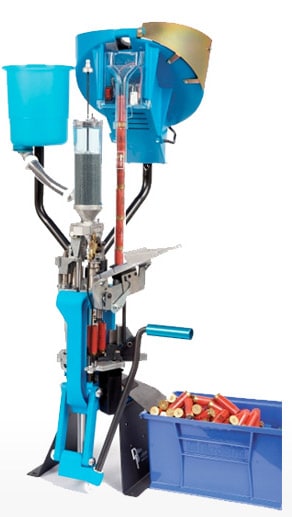 If you’re in a hurry of mass-producing ammo, say about 800 rounds per hour, then, this Dillon Precision Reloading Press matches your needs well.

Of course, you can go for more when you use both the case and bullet feeders in the same process.

This is recommended for both pistol and rifle calibers.

XL 650 also has the automatic indexing system which speeds up the production rate.

With this, manually turning the shell plates to move to the next steps aren’t needed any longer.

The process is semi-automatic, and you only need to do one stroke manually to set the bullet on the power-filled cartridge.

With this XL 650, there’s no immediate need of adjusting the dies because they will stay in their perfect adjustments with its removable tool head.

Perhaps the focal point of this reloading press is there’s no need of removing them when changing calibers.

Though it doesn’t often happen, depending on the caliber and the volume of the case, the powder loaded is prone to spilling. This is unlike Hornady’s high-tech system that only dispenses the right amount of gun powder into the cartridges.

The bullet feeder and case feeder are both optional accessories for XL 650, but they will significantly improve the machine’s production rate. 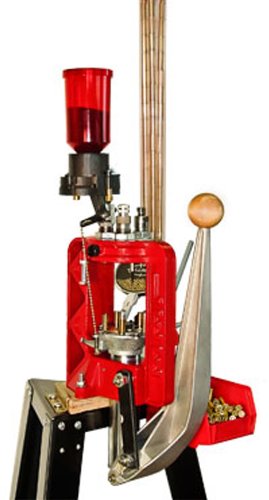 If you’re tight on the budget and want a cheap alternative to the most advanced progressive reloading press of today, Lee Loadmaster is your best option.

Reloading both rifle and handgun cartridges (around 400 rounds per hour) is quick and easy as there are five progressive stations.

Furthermore, it has an oversized, chrome-plated diameter ram to accommodate the largest of rifle cartridges.

One of the best features by Lee Loadmaster is the automatic indexing system to ensure the consistency and quality of the ammunition.

The removable turret head makes things faster such as quickly changing from one caliber to another.

In setting up to a particular caliber, the dies stay intact and retain their perfect adjustments. Only the shell plates are needed to be switched out in this arrangement.

Lee Loadmaster’s Pro-Auto Disk Powder Measure is an excellent feature because it guarantees no spilling or leaking of the gunpowder loaded into the cases.

It dispenses the right amount before crimping the shells. Thus, upon every pull of the handle, quantity and quality control is thereby controlled.

This machine’s primer system is quite unreliable (not common to all Lee Loadmaster units). It’s unreliable in a way that it malfunctions and normally works again. Also, the powder measure data is not accurate. Because of this, you may have to check if the weight of the dispensed powder is correct as opposed to the product information of Lee Loadmaster.

Lee Loadmaster is compatible with a lot of standard dies that have measurements of 7/8 to 14 inches.

The dies and the caliber-specific shell plates are typically sold separately.

Despite its lower price, the construction is durable as Loadmaster utilized a die-cast aluminum frame. You can rely on it for regular and everyday use because it will last for a long time. 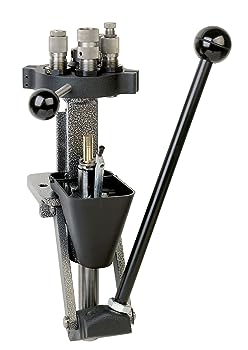 This Lyman reloading press is a type of turret press.

This is not in a different league with the progressive reloading presses.

T-Mag II is best recommended for gun aficionados who prefer a striking balance along with the other types of reloading press.

It has six different stations that function at once. Also, it is best used for pistol reloading.

Just like the previous progressive presses, changing calibers is fast through the removal of the turret head while the current adjustment of the dies is retained.

The turret handle is responsible for the removal of the turret head. It is ambidextrous which provides ease of operation to all kinds of users.

This Lyman T-Mag II is not a kit, so you will have to purchase separate accessories such as shell plates and dies to make it functional. The construction of the primer tray is made of plastic which might be a turnoff to those who want their reloading press to last a long time.

T-Mag II’s base is versatile so you can mount it easily to a wood or metal bench. Its durability is certain because of its cast iron construction with a rustproof finish.

It is lightweight compared to other reloading presses at 9.8 pounds. 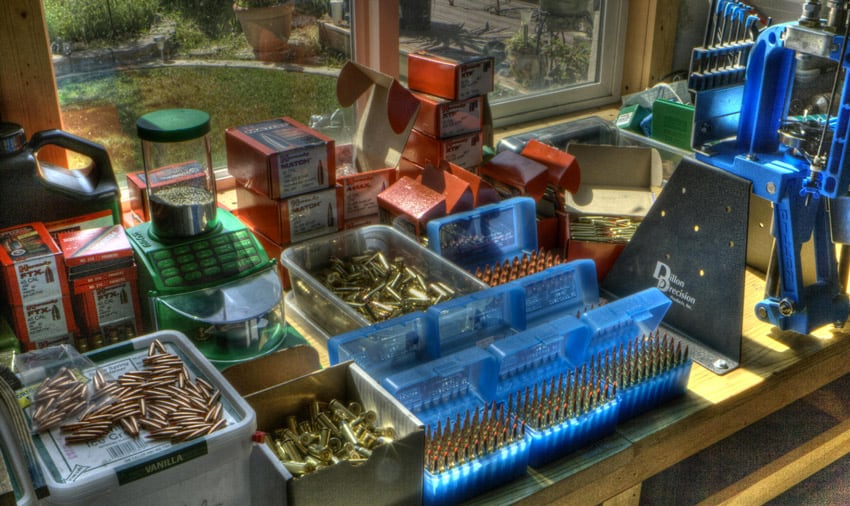 Among the three, it’s easy to say that the progressive press is the most expensive.

However, it’s the most efficient because you can primarily benefit from its large capacity and efficiency.

To further get an understanding about the progressive reloading press, let’s define both of the single stage press and the turret reloading press briefly: 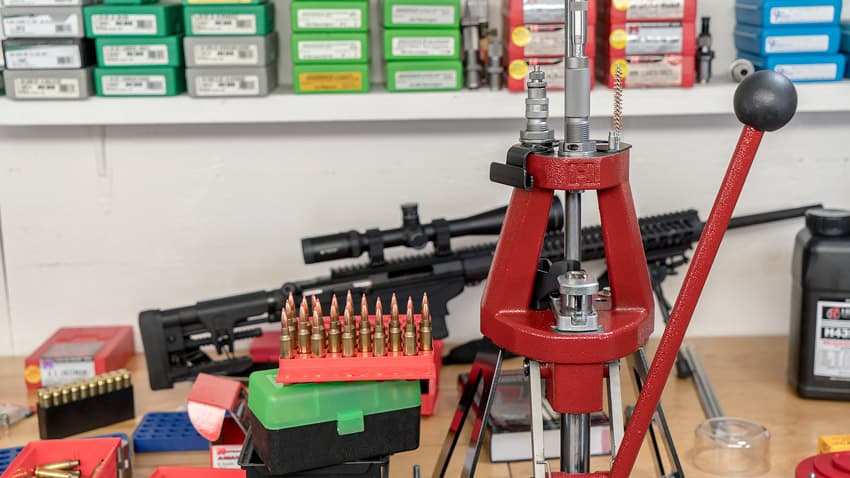 This is considered the simplest reloading machine and is best recommended if you’re a novice on most things related to this niche.

The process is plenty straightforward, and there are lesser chances of going wrong.

This reloading press works slowly and produces an average of 100 ammo per hour.

However, despite the time-consuming task, the process of reloading is guaranteed to be precise and of good quality.

Among the three types of reloading presses, this one is the cheapest. 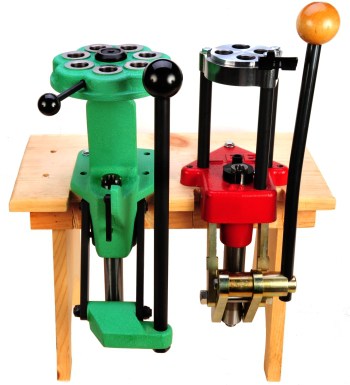 This machine is a better improvement compared to the first type introduced.

It takes one cartridge at a time and typically has four or five die stations.

This means that you don’t need to assemble them in a batch process unlike with a single-stage press.

Of course, beginners can go gunning for this turret press especially if you prefer to produce faster results.

A turret press is called that way because of the revolving turret positioned at the top which helps process multiple dies at once.

It is also good for working on various caliber rounds as setting up brings not much hassle compared to a progressive press.

The turret press is the middle ground among all of the reloading press types. 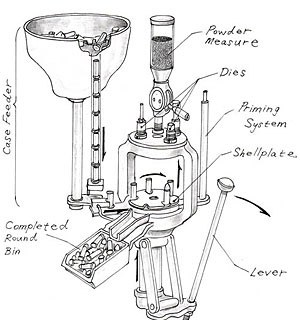 This press is considered to be like an ammunition factory.

The process is almost automatic, and you just have to install and adjust the dies. Changing them is required when you work on different calibers.

Because the progressive reloading press is so advanced, it might be a problem for some beginners who aren’t technically oriented.

But know that it’s the most efficient of the three and the best fit for all the other types.

Choosing the best progressive reloading press depends on their production rate, efficiency, and other loaded features.

Comparing the progressive reloading press with the single-stage press and turret press, you’ve finally learned the differences between the three and which would be relevant to your needs.

With our best progressive reloading press reviews, you can begin a new hobby of making your ammunition that meets your standards. And with this newfound hobby, you can save a lot of money in the long run.