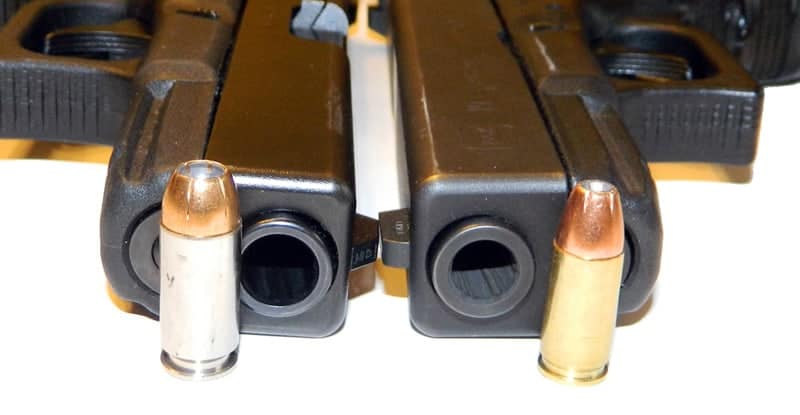 Which caliber do you need for your next semi-automatic pistol?

To help answer these questions, we’re going to compare and contrast the 9mm and .40 S&W rounds with one another, by discussing the following factors:

First and foremost, which of the two rounds is the more available? Which is easier to find?

There’s no question that 9mm is the more available of the two. This isn’t to say that .40 S&W isn’t widely available, because it is.

But 9mm has been around for much longer than the .40. It’s also far more common worldwide, and is by far the most common and plentiful centerfire pistol round in existence.

Again, 9mm is the winner here.

Ammo prices in general have dropped significantly over the past year. Today, the average price for 9mm is around ten dollars for a box of fifty full metal jacket rounds.

In contrast, a box of 50 FMJ .40 S&W rounds will cost a few dollars more, probably around fifteen dollars or so.

There are simply more handguns chambered for 9mm Luger, than for .40 S&W.

But even today, there are simply more guns being produced for the 9mm as well. Some manufacturers will make 9mm pistols, but not make a .40 S&W counterpart to it.

That being said, there are still a very wide number of options for .40 S&W as well. You have a number of full-size, mid-size, compact, and sub-compact options for each size, such as the full size Glock 22 or the subcompact Glock 27.

Yet again, the winner is 9mm.

The 9mm is simply a smaller sized bullet. As a result, you can squeeze more 9mm rounds into a magazine than you can a .40 S&W.

To prove this point, let’s look at the magazine capacities of different handguns:

You get the point. 9mm pistols simply have much greater capacity than their .40 S&W counterparts, regardless of whether the firearm is a single stack or double stack.

Up until now, the 9mm has been dominating the .40 in terms of availability, cost, handgun options, and magazine capacity.

But what about when it comes to ballistics and performance? This is where the .40 S&W may have an advantage over the 9mm.

FBI standards state, very bluntly, that a handgun round needs to be able to penetrate at least 12 inches of ballistic gel, and not over penetrate past 18 inches.

Both the 9mm and .40 S&W, depending on the specific self-defense rounds that you select, can meet these standards easily.

There are many of effective self-defense options as well, such as from Cor-Bon, Federal, Speer, and Hornady.

That being said, the .40 S&W is still more effective than the 9mm when it comes to penetrating barriers. This means that if the round comes into contact with a hard surface barrier, it is less likely to be deflected or ricocheted in comparison to the 9mm.

Not only does this mean that the .40 S&W will do a better job of penetrating through thick clothing on an attacker, it is also less likely to cause collateral damage if the round were to miss and strike something else.

In short, both the 9mm and .40 S&W are highly effective for self-defense and easily meet if not exceed FBI standards, but the edge does go to the .40 S&W for better performance.

Recoil is important because it helps determine how shootable a firearm is. Less recoil means that you can fire faster follow up shots.

Recoil is also determined by a number of factors, including the size of caliber and the size and weight of the firearm.

Almost always, the recoil of the .40 S&W is more noticeable and snappier than the 9mm Luger, so long as you are shooting two guns that are comparable.

For example, the Glock 17 and Glock 22 are virtually the same handgun, only one is 9mm and the other is .40.

The recoil of the Glock 22 is definitely greater and more noticeable over the Glock 17.

That being said, if you were to shoot a smaller and lighter Glock 9mm, such as the Glock 26, you may notice that it has snappier recoil since the lighter weight of the gun does a poorer job of mitigating the recoil.

But in general, 9mm is the easier and more pleasant gun to shoot. There are also a wide variety of 9mm loads that have less recoil as well.

In conclusion, both the 9mm and the .40 S&W are highly effective calibers that have proven themselves.

But overall, the 9mm is the superior caliber, especially for beginners.

It’s cheaper, it’s more available, it carries more rounds, recoil is less noticeable, and it’s highly effective for self-defense (even if not as effective as .40 S&W, but it’s still splitting hairs).

If you are new to guns, you’ll be better served by going with a 9mm pistol for these reasons, and you’ll likely enjoy shooting the gun more than the .40 as well.