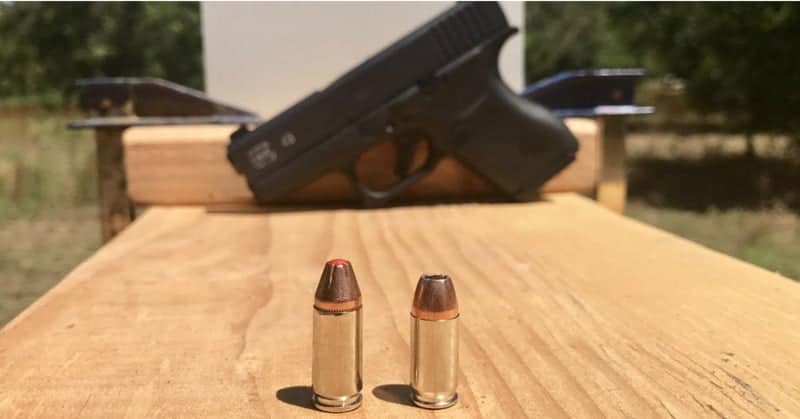 Are you looking for a solid self-defense pistol but struggling to decide between .380 and 9mm cartridges?

We’re here to give you a brief rundown of the facts that separate these two respected weapons and guide you toward making the best personal decision.

Gun owners have been debating the benefits of .380 vs 9mm for years. From price to ballistics, there are several specifications to break down before making a final decision.

We’ll do our best to provide detailed descriptions of each weapon so that you can determine which is best suited for you.

For starters, the .38 is one of the most popular firearms in the United States. In fact, before the 1990s, the .380 was the primary weapon used by police operatives.

With that in mind, the 9 mm, which is slightly more powerful, is now the most commonly used police revolver.

Today, the .380 is primarily used as a backup weapon. Still, the .380 is a popular self-defense weapon for civilians because its size makes it easy to conceal and handle.

The .380 ACP was first manufactured by Colt during the beginning of the 20th century and sold as a self-defense weapon. It was created by a weapon designer by the name of John Moses Browning.

Meanwhile, the 9mm (or 9×19mm Parabellum) was developed by a man by the name of Georg Luger. It was conceived a few years earlier in Germany and mainly sold for military use.

The 9-mm automatic has a higher velocity than the .380, but the difference is not as significant as you may expect. The 9-mm bullet is the same diameter as the .380, yet the casing and length are both larger.

Meanwhile, the .380 has a low recoil yet enough power potential to stop a target in its tracks. Since it doesn’t push back excessively, it is a great choice for inexperienced shooters. 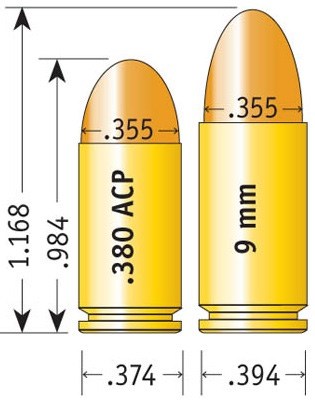 While the size differences are nominal, it is not difficult to tell the difference between the two.

It is also important to note that 9 mm bullets are longer in length and can, therefore, hold more powder. This contributes to a higher velocity. It also helps bulk up their mass, ensure that they do more damage.

Because of the .380’s slightly smaller size, it is often the preferred option for concealed carry and self-defense.

However, physics should not be completely ignored when making a decision. As such, the 9 mm offers an arguably better performance.

Keep in mind that these numbers vary depending on both the length of the barrel, type of gun, and type of bullets.

It is also important to note that the .380 is known for it short-range and rapid-fire accuracy. While the 9 mm is more powerful and offers a greater stopping power, its recoil can be a serious burden for novice shooters.

Of course, precision always comes down to the skills of an individual marksman, no matter how excellent a ballistic score may be.

While .380 cartridges are currently more expensive than 9 mm, .380 pistols are cheaper than their large counterparts.

The Glock 19, an equally popular 9 mm handgun, has a 4-inch barrel. It offers a velocity between 947 and 1,146 feet per second. As you can see, a larger caliber cartridge and longer barrel make for a more powerful blow.

Of course, strapping on a “mouse” is going to be far more attainable in situations where a bulky holster just won’t do.

We cannot deny the hand leability of the .380 cartridge. If you’re able to look past its weaker penetration and velocity, the .380 offers more control and precision for close quarters shooting scenarios.

Keep in mind that the .380 caliber cartridge also has less recoil, which equates to less damage. For a cost of around 30 cents per bullet, you won’t mind pumping out a couple of rounds of lead if it means saving a life.

Meanwhile, at a cost of 25 cents per bullet, the 9 mm is an affordable and still reasonably sized ammo for your concealed carry.

It is important to note that less recoil translates to increased accuracy. It also makes it easier for a shooter to make followup shots. However, many shooters prefer a more resounding response from their pistols.

Of course, the magazine capacities vary between different types of pistols. Both 9 mm and .380 pistols can be bought and fashioned in a similar weight class, with the .380 on the lower end of the spectrum.

Before ruling out either option, run through any and all considerations before settling on a specific caliber.

For example, think about how you plan to carry your weapon. One of the most popular ways of carrying a concealed weapon is in a pocket. For such an application, smaller .380 pistols are an obvious choice.

Nevertheless, if you’re sporting bulky clothes, you may be able to get away with the larger 9 mm.

Beyond that, apply an honest interpretation of your personal skill level. Remember, you’ll need to be able to draw your weapon, aim accurately, and be able to stomach the recoil.

For shooters who have not maximized their muscle memory, the .380 should be a serious consideration, as it is far easier to handle. What’s more, it has the potential to cut away some of the time between followup shots.

Of course, it is also important to find a cartridge that fits within the realm of your personal budget.

While we mentioned before that 9 mm ammo is relatively cheaper, your initial investment is going to be more.

Beyond that, take into consideration that you will need to purchase ammo on an ongoing basis to continuously practice your shooting skills.

With all that being said, the 9 mm is the clear winner when it comes to stopping power.

If you anticipate using your weapon in a situation that demands fast and accurate incapacitation of your target, then there is no better time to get used to a heavy weapon.

Let’s face it, some weapons are intended to sit idly in someone’s bedside table, while others will face the squalor of city streets.

Ultimately, your decision should be based on your own comfort, not on a preconceived notion of either weapon. No matter which weapon you settle on, you are going to have a better chance of winning a match than if you were fighting with your fists.

We hope you enjoyed our attempt to help deaden some of the flack surrounding the age-old rivalry between .380 and 9 mm cartridges.

However, after looking at all the facts, we think its safe to say that these two each have their place in the weapon world. In fact, the decision basically comes down to user preference and skill level.

While numbers suggest that the 9 mm has a bigger bite, the .380 can be seen as the premier self-defense weapon because of its size, affordability, accuracy, and ease of use.

Regardless of the caliber you choose, the best way to succeed in a shooting scenario is by seeking out proper training and practicing regularly.